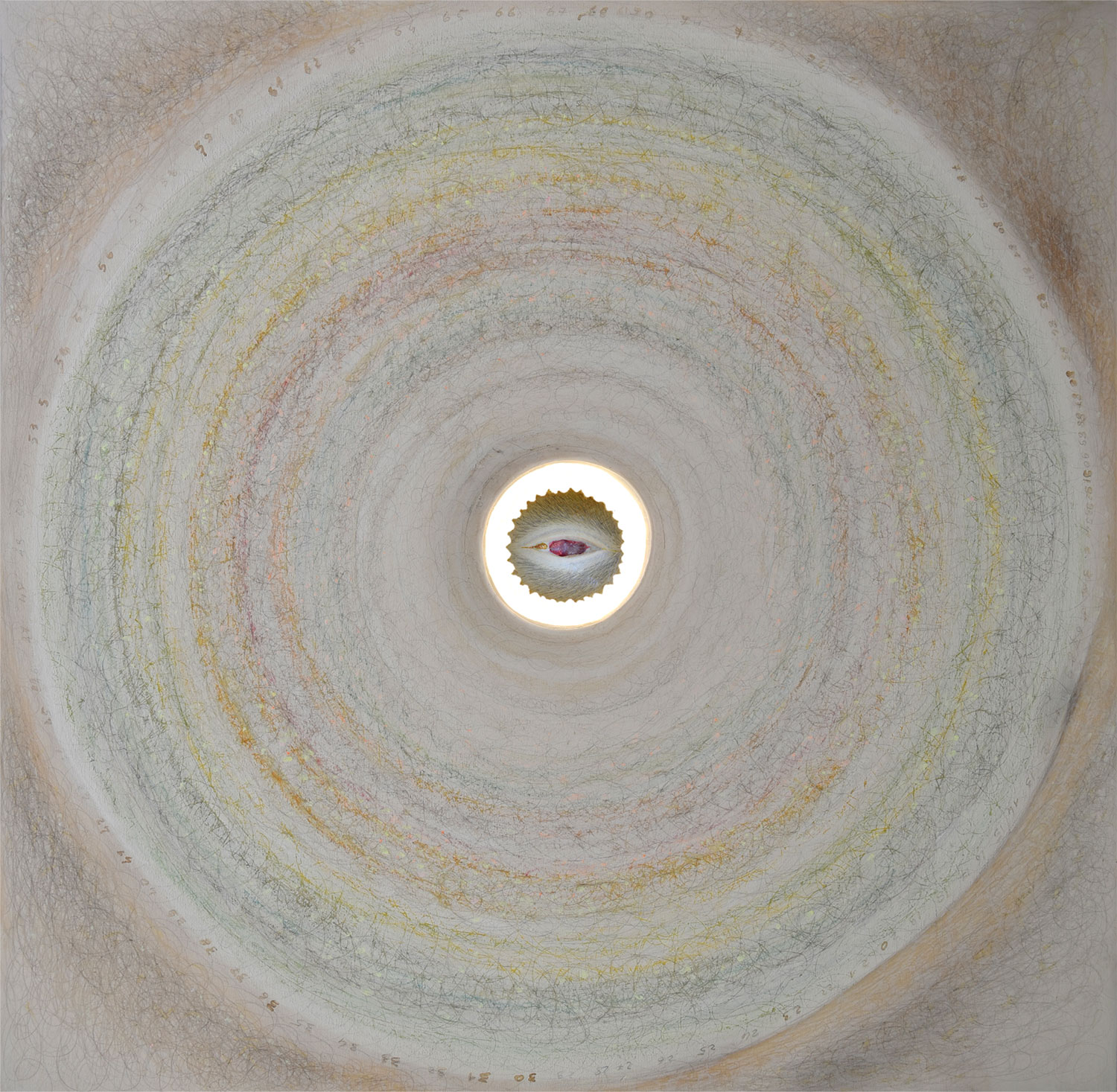 REVIEWS – IL CERCHIO DELLA VITA
Scagnoli’s artwork “Il cerchio della vita” was realised with a mixed technique on panel for installation on wall. The image shows an extended series of circular lines, which form concentric circles of different colours. They share the same background, realised with a peculiar technique: a blurred multitude of thin, semicircular and sinusoidal lines scratched with a silver point. They overlap each other as if they were struggling, creating scattered grey bundles that serve as a base of colour for the entire work. The edges of the circles were outlined using light oil and acrylic colours. When observing the artwork from a certain distance, colours produce a wisely balanced and harmonious effect. By getting closer, it is possible to identify its set of colours, from yellows to beige, red, green and violet, which lighten gradually towards the centre of the artwork. It consists in an irradiated insert mounted on top of a LED. The icon at the centre of the image can both be seen as an eye surrounded by heavy eyelids and as a graphic representation of women's private parts, sublimated with the use of gold and vermilion. The central image is also related to the external circle of the artwork, where light, almost invisible numbers from one to ninety-four can be seen. They represent the age of the artist’s father, who, during his childhood, used to tell him about the cycle of life. Therefore, they are the symbol of a long life, which includes different phases. Curiously, the numbers do not follow the pattern of traditional clocks: they do not start in the top right quarter, but in the bottom right one, where usually number four appears. Beyond this, analogies exist between the artwork and the mean we use to measure time. Despite it has no hands, “Il cerchio della vita” shows a sense of dynamism given by the progression of numbers, a smart expedient used by the artist to introduce the concept of time. The centre of the artwork, which is also its key element, represents the origin of the world, as in Gustave Courbet’s famous painting. Its central icon symbolises fertility, birth and the regeneration of life, but it also appears as an eye that examines the past, the present and the future. Giovanni Scagnoli’s artwork is a sort of meditation on time and on the invisible, cyclic nature of life that slowly, eternally and immutably wraps around itself.