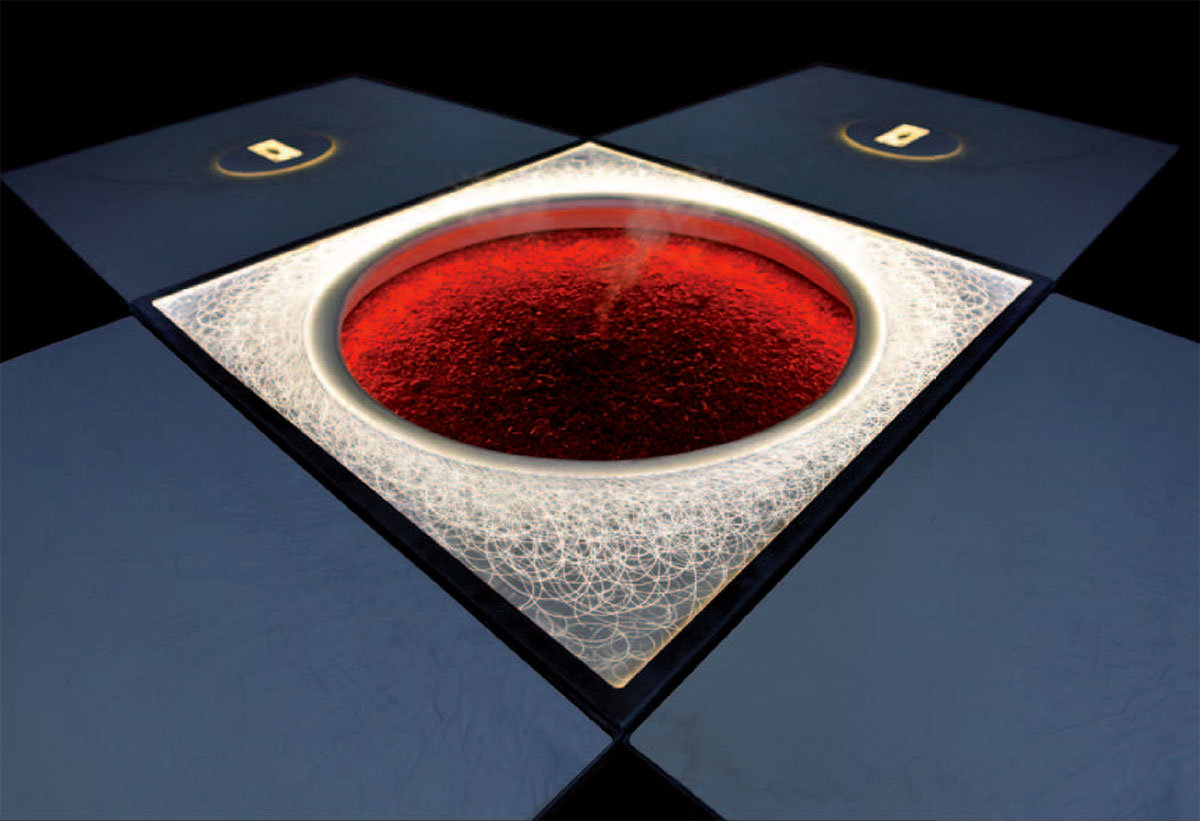 REVIEWS – DIMORA DEL TEMPO In Sarnano, where he lives, Giovanni Scagnoli has created his personal hortus conclusus, which he has built on his own over time. In his garden, in his house and in his studio, the same formal will flows and blurs unintedrruptedly between the indoors and the outdoors. It all starts in the garden with the discovery of nature that proves to be both the same and a new one. Scagnoli firmly expressed the will to tie his research to the local territory in 2003, with the multimedia event “EXTRANET FLASH. Aforismi nell’angolo segreto”. The event was organised in his own house in Contrada Vecciola in partnership with the Macerata Academy of Fine Arts and with the Municipality of Sarnano.
The artist works on matters and materials, constantly facing the subtle competition among natural, artificial, and technological elements. Scagnoli works with primary forms by manipulating symbols and meanings to create new sculptural identities, where the installation takes possession of the space around it. Scagnoli’s Dimora del tempo, held in Gualdo, shows his work’s primary theme – the cycle of life and its regeneration – through highly symbolic connections with archetypical forms and materials, which constantly evoke the polarities of existence: light-dark, earth-sky, good-evil, life-death. A process of regeneration performed through artistic intervention that gives meaning and sense to the materiality of elements, producing something different.
The three floors of Gualdo’s Clock Tower, where time is usually measured, host a narration in which it is denied and dilated, and where its mechanical precision is distorted. Time gets a psychological meaning, which reflects one's state of mind, memories and creative projections.
The cross on the ground floor represents the subject’s orientation in relation to cardinal points and to himself. The structure of the cross, that is both centripetal and centrifugal, has an ascensional meaning, which relates to the symbol of the ladder-bridge. Moreover, fluorescent colours and wood, coated with white iridescent ink, convey a sense of thickness and a bright vibration to the surface. Lines scratched with a silver point represent a dense repetition of the artist's signature. It is an existential and discontinuous autography, a subjective view traced by the creator's hand, which reveals the pressure applied to others and to the surrounding environment. A green laser beam comes out of vapour from the crevice at the centre of the cross, realised with red shellac, which evokes fire and blood. The beam hits the sandstone pendulum moved by the clock’s mechanism. All this recalls an archaic world and natural time, measured by the Sun in its apparent periodic motion, from which the succession of night and day originates.
From the cross, insects representing instinctive human fears proceed solemnly along the rungs of an old wooden ladder – an object found casually, but which has proved to be a positive contribution – that leads to the upper floor. The ladder and the scorpion are part of the artist’s lexicon and they can be seen in other of his works. The former symbolises a bridge to the sky, whereas the latter can both be seen as a deadly, nocturnal creature and as a symbol of sacrifice and abnegation. A basket of wheat at the base of the ladder stands on a series of concentric circles, generating the light that illuminates the rungs where the insects are carrying out their ascensional procession, which culminates with a golden egg. On the first floor, a series of artworks evoke the transformation of matter. The biomorphic symbol of the seed-shell-vulva and primigenial ovaloid forms recur, developing an intrinsic life, as nature does. These are caught with an effect of suspension, typical of Scagnoli's artworks. The mushroom, the tree/cloud and the beehive/nest are authentic, but various pigments and gold leaf have been applied to them in order to obtain a mutation and to evoke the morphology of organic, placental, cerebral and pulmonary tissues. On the other hand, mirror panels give back their deformed images. It is also possible to spot little “miracles”, like the hologram of a scorpion, which appears thanks to the scientific principle of darkrooms, used in photography.
Time originates from the transformation of matter. A motionless and unchanged universe would have no time. Time perception corresponds to the awareness that the reality we are part of has materially changed: we do not grow old because time has passed, time passes because we grow old. The concentric circles, like those in the trunk of a tree, reveal a progression of numbers from 1 to 94: it is the age of the artist’s father, who has taught him everything about the earth, plants, animals and life.
The past can be analysed, seen and imagined through memories, monuments, documents, architectures, objects, photographs and films. It can also be measured through growing nature, rocks dating, carbon-14 production, amino acid dating, spontaneous fission of uranium-238, Planck’s photon and Higgs boson. As our dating systems become more and more scientifically advanced, giving us the chance to quantify surprisingly short time spans and going amazingly back in history, almost to the Big Bang, time eludes the possibility to even imagine it.
On the upper floor, a red light surrounds a regenerated clock mechanism, full of new spiritual substance. With its inflexibility now transfigured, it shifts outwards, projecting two red laser beams, which come out of the tower to visually link the church to the municipal building. In this way, as in ancient cosmology, sacred and profane time are reunited.
In his own way and from the finite position of his existential perimeter, the artist, who acts both as a scientist and as a magician, establishes a deeply and intimately religious dialogue between the Earth and the Sky.